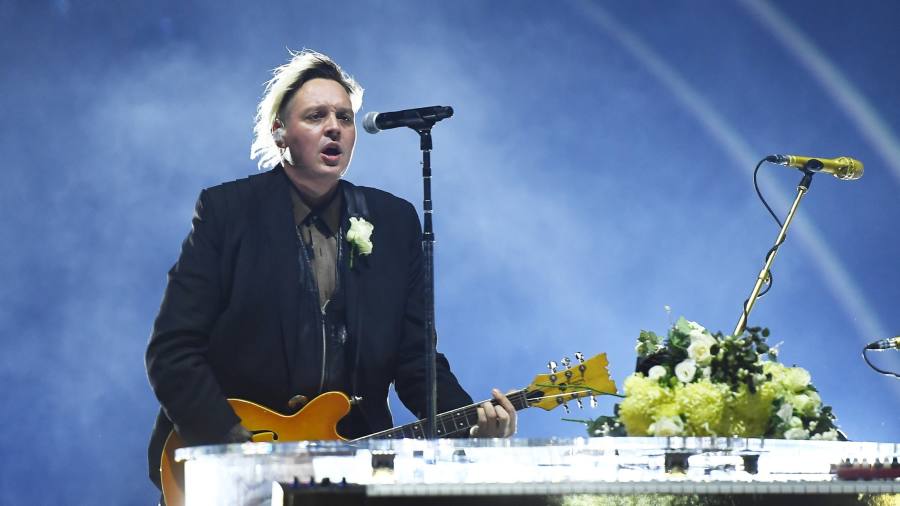 What a strange tour this turns out to be for Arcade Fire. Just before it started, Pitchfork, the online bible of American independent music, published the testimony of three women and a gender-fluid individual alleging episodes of sexual misconduct by the band’s lead singer, Win Butler. Their supporting act, singer-songwriter Feist, quit amid calls to drop out of the tour. True to the juggernaut nature of their music, however, the Canadian-American ensemble carried on – only to find themselves on stage at London’s O2 Arena just hours after news of the Queen’s death was announced.

The show began with a hastily assembled tribute, in the form of a recording of a New Orleans funeral march by Louis Armstrong, followed by a moment of silence. There was more or less silence in the 20,000-seat hall. It wasn’t complete: Arcade Fire’s popularity has waned since their commercial zenith in 2010 when they played two nights at The O2. But the arena was crowded enough, and with enthusiasm, to cast doubt on notions of a boycott following the Pitchfork report, the claims of which are disputed by Butler.

He made no reference to the controversy during the show. But the band’s initial grouping, standing tight on a small island stage in the auditorium, seemed designed to emphasize the unity of the nine musicians. They opened with the first two songs from their debut album. funeral. It was a statement of continuity with themselves, the young idealists who emerged from Montreal in the early 2000s with a fiery voice and a just blaze of instruments.

After this acceleration from foot to ground towards their origins, the group decamped towards the main stage of the arena. There they settled into a more typical rock hierarchy, with the drummer at the back and other musicians on the flanks. Butler stood in front, jackknifing his body as he screamed as if possessed by a higher force. He was joined as a focus by multi-instrumentalist and vocalist Régine Chassagne, who co-founded the band with Butler and is married to him.

The timeline shifted to the present with the release of tracks from their latest album, WE. He’s looking to recapture their classic sound, a “return to form” gamble often taken by veteran bands when they’re on the slide. But the songs do it in spurts, mixing hammered chords, declamatory chants and bursts of musical sprints like a puzzle of past glories. “Age of Anxiety II (Rabbit Hole)” integrated into a gripping electronic anthem, with Butler taking a field trip through the audience with his microphone. But “Unconditional I (Lookout Kid)” clumsily recapped the childhood themes that run through their work, while “End of the Empire I-III” was a bombastic talk of American decline. He appeared as a proxy subject for their own fading powers.

Surrounding these new numbers were well-executed reminders of how strong these powers once were; the intensely driven dance-rock of 2013’s title track Reflector was a highlight. They ended back on the island stage with a signature anthem, funeral“Wake up”. Chants rang out as the band walked off the stage and up one side of the arena’s raked seats, singing and playing drums as they went. Butler’s back was slapped warmly by members of the public as he passed. Arcade Fire is a once-great band that suffers from a slow burnout, not a cancellation.