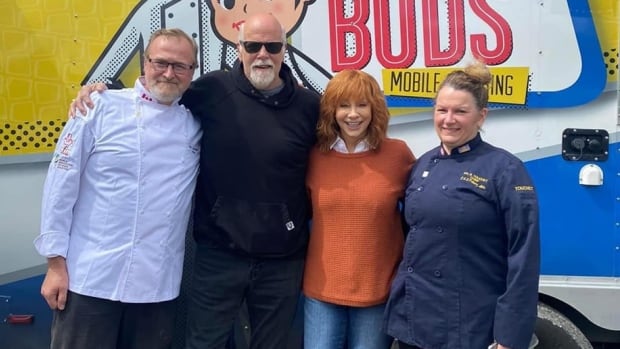 Many music fans and residents of Merritt, British Columbia are thrilled to see American country music singer and actress Reba McEntire touring their neighborhood this week.

McEntire stars in tentatively titled film The hammer which is due out this year.

According to the production team, McEntire and other actors worked at multiple locations, such as hotels and gas stations, along Merritt’s Quilchena Ave.

McEntire, 67, is no stranger to the inland city of British Columbia, dubbed the country music capital of Canada, after performing at the Merritt Mountain Music Festival in 2007.

A McEntire mural on Quilchena Ave. is one of more than 20 in the city with country music stars.

Kamloops resident Mahkayla Spahan-Charlie says she and her family are big fans of McEntire and were thrilled to see the singer filming earlier this week.

“I finally got to see her up close and I was like, ‘Hey, that’s cool!'” she said, adding that she had asked for a photo with McEntire to show her grandmother, who always played McEntire music at home – which Spahan-Charlie grew up listening to.

Abdulla Daiani, the film’s stage manager, said the producers considered Kamloops as a filming location, but ultimately settled on Merritt because they want “the look of the western part of the United States.”

“We found the right locations there,” Daiani said.

“We rented a private piece of land next to the Moon Shadows RV campground, and we turned it into one of our sets…we shot the Coldwater Hotel and the Quilchena Hotel, this very old and very nice hotel.”

Daiani says McEntire is happy to return to Merritt after two years of the pandemic.

“We’ve all isolated ourselves and stayed home, and people have lost connection with people. Anything we can do in a community to bring people back into the community, to re-establish that connection is important,” he said. Roline said.