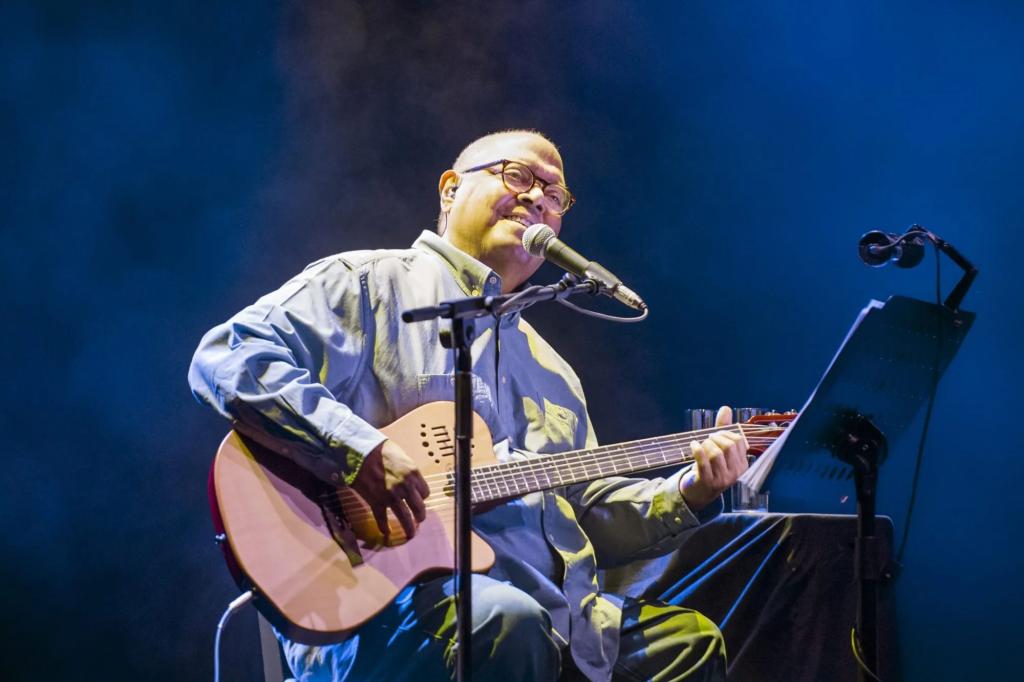 HAVANA — Pablo Milanés, the Latin Grammy-winning balladist who helped found Cuba’s “nueva trova” movement and toured the world as a cultural ambassador for Fidel Castro’s revolution, has died in Spain, where he was undergoing treatment for blood cancer. He was 79 years old.

One of the best-known Cuban singer-songwriters internationally, he has recorded dozens of albums and hits like “Yolanda”, “Yo Me Quedo” (I stay) and “Amo Esta Isla” (I love this island) in a career that spanned more than five decades.

Milanés’ representatives released a statement stating that he died early on Tuesday in Madrid.

In early November, he announced he was hospitalized and canceled concerts.

Pablo Milanés was born on February 24, 1943 in the eastern town of Bayamo, in what was then Oriente Province, the youngest of five siblings born to working-class parents. His musical career started with him singing and often winning local television and radio contests.

His family moved to the capital and he studied for a time at the Havana Conservatory of Music in the 1950s, but he credited neighborhood musicians rather than formal training for his early inspiration, as well as trends in music. United States and other countries.

In the early 1960s, he was part of several groups including Cuarteto del Rey (the King’s Quartet), composing his first song in 1963: “Tu Mi Desengano” (You, my disillusion), which is about leaving a lost love.

“Your kisses don’t matter to me because I have a new love/to whom I promise to give my life,” the tune says.

In 1970, he wrote the Latin American love song “Yolanda,” which is still an enduring favorite everywhere from tourist cafes in Old Havana to canteens in Mexico City.

Spanish newspaper El Pais asked Milanés in 2003 how many women he flirted saying they inspired the song. “None,” he replied with a laugh. “But many have said to me, ‘My child is the product of ‘Yolanda’.”

Milanés supported the Cuban Revolution of 1959 but was nonetheless targeted by the authorities during the early years of Fidel Castro’s government, when any form of “alternative” expression was highly suspect. Milanés was allegedly harassed for wearing his hair in an afro and given mandatory work details for his interest in foreign music.

These experiences did not dampen his revolutionary fervor, however, and he began to incorporate politics into his writing, collaborating with musicians such as Silvio Rodríguez and Noel Nicola.

The three are considered to be the founders of the Cuban “nueva trova”, a generally guitar-based musical style that dates back to the ballads troubadours composed during the island’s wars of independence. Steeped in the spirit of 1960s American protest songs, nueva trova uses musical storytelling to highlight social issues.

Milanés and Rodríguez in particular became close, touring the world’s stages as cultural ambassadors of the Cuban Revolution and bonding over boozy sessions.

“If Silvio Rodríguez and I got together, the rum was always there,” Milanés told El Pais in 2003. “There were always three of us, not two.”

Milanés was friends with Castro, a critic of American foreign policy and even for a time a member of parliament in the communist government. He considered himself loyal to the revolution and spoke of his pride in serving Cuba.

“I am a worker who works with songs, doing what I know best in my own way, like any other Cuban worker,” Milanés said, according to The New York Times. “I am true to my reality, my revolution and the way I was raised.”

In 1973, Milanés recorded “Versos Sencillos”, which turned poems by Cuban independence hero José Martí into songs. Another composition became something of a rallying call for the political left in the Americas: “Song for Latin American Unity,” which praised Castro as the heir to Martí and South American liberation hero Simon Bolívar. , and made the Cuban Revolution a model for others. nations.

In 2006, when Castro stepped down as president due to a life-threatening illness, Milanés joined other leading artists and intellectuals in expressing their support for the government. He promised to represent Castro and Cuba “as this moment deserves: with unity and courage in the face of any threat or provocation”.

Still, he wasn’t afraid to speak his mind and sometimes publicly pleaded for more freedom on the island.

Stay up to date with the latest news with the evening update.

In 2010, he supported a dissident hunger striker who demanded the release of political prisoners. Cuba’s aging leaders “are stuck in time,” Milanés told Spanish newspaper El Mundo. “History should advance with new ideas and new men.”

The following year, as the island embraced economic changes that would allow for greater free market activity, he pressed President Raul Castro to do more. “These freedoms have been seen in small doses, and we hope that over time they will grow,” Milanés told The Associated Press.

Milanés disagreed without dissenting, pushed without pushing, following Fidel Castro’s notorious 1961 warning to the Cuban intellectual class: “In the Revolution, everything; apart from the Revolution, nothing.

“I don’t agree with a lot of things in Cuba, and everyone knows it,” Milanés once said.

Still political even when his bushy afro had given way to more conservative, gray, thinning locks, in 2006 he contributed the song “Exodo” (Exodus), about missing friends who left for other lands, to the album “Somos Americans” (We Are Americans), a compilation of songs by American and Latin American artists about immigration.

Rodríguez and Milanés had a falling out in the 1980s over reasons that were unclear and were barely on good terms, although they maintained a mutual respect and Rodríguez collaborated musically with Milanés’ daughter.

Milanés sang in the 1980s album “Amo esta isla” that “I come from the Caribbean and I could never walk on dry land”; nevertheless, he divided most of his time between Spain and Mexico in the following years.

According to his own account, he has had more than 20 leg surgeries.

He has also won numerous Cuban honors, including the Alejo Carpentier Medal in 1982 and the National Music Prize in 2005, and the 2007 Haydee Santamaria Medal from the Casa de las Americas for his contributions to Latin American culture.