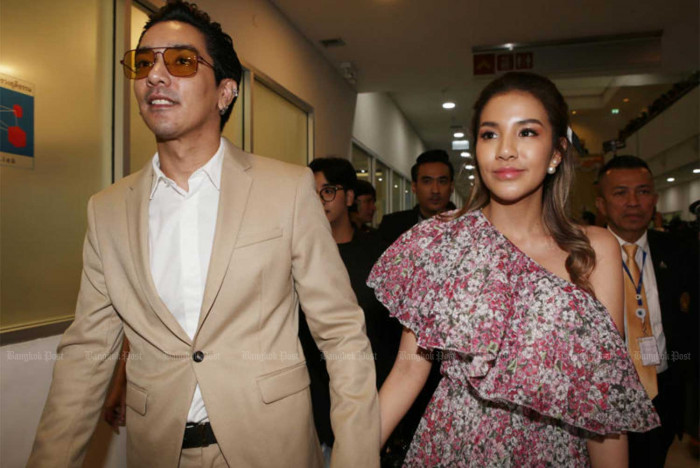 Pattanapon ‘DJ Man’ Kunjara Na Ayudhaya (now Minthakhin) and his singer-wife Suteewan ‘Baitoey’ Thaweesin arrive at the Special Investigations Department on November 19, 2019 to explain their relationship with the owner of the unlicensed online broker Forex-3D, who is accused of multi-billion baht fraud. (File photo)

Pol Capt Wisanu Chimtragool, director of the DSI’s Illegal Financial Crimes Bureau, said Mr Pattanapon, Ms Suteewan and two key players in the Forex-3D scam were being summoned to hear charges of collusion in obtaining loans for fraud, public fraud and violation of the Computer Crimes Act. They were due to report to DSI investigators on September 15.

He said investigators were confident they had enough evidence to support the charges against them, particularly the celebrity couple.

They were among 16 people believed to be involved in the Forex-3D scam. The other 12 had not yet been summoned. Investigators were still compiling the cases against them, Pol Capt Wisanu said.

Mr. Pattanapon aka DJ Man formerly known as Pattanapon Kunjara Na Ayudhya and his singer wife livestreamed on Facebook on August 20, claiming that they never induced anyone to invest in Forex-3D and that they were not listed as Forex trading partners. 3D Co. They said they were ready to cooperate with the DSI.

In 2019, the DSI summoned the couple to clarify their connection to Forex-3D owner Apiruk Kothi, who is accused of a multi-billion baht fraud.

Forex-3D claimed to be an online currency dealer, with a flashy website, but was unlisted and operated like a Ponzi scheme. Celebrities have been paid to promote it.

Last month, actress Sawika, her mother and brother were taken to court and denied bail for operating the forex Ponzi scheme, which defrauded thousands of people out of an estimated $2 billion. baht.

Sawika, 36, her mother Sarinya and older brother Kitichet were among 19 defendant prosecutors charged by the criminal court with public fraud and computer crime. All were denied bail.

Nitithorn Kaewtor, lawyer for Mr Pattanapon and his singer wife, said the couple were ready to cooperate. They were preparing documents to clarify the money transfer to Forex-3D executives, after DSI investigators questioned their role in the scheme.

Mr Nitthorn said the money could have been the couple’s investment in the initial phase of the scheme. He maintained that his clients were still in the country.