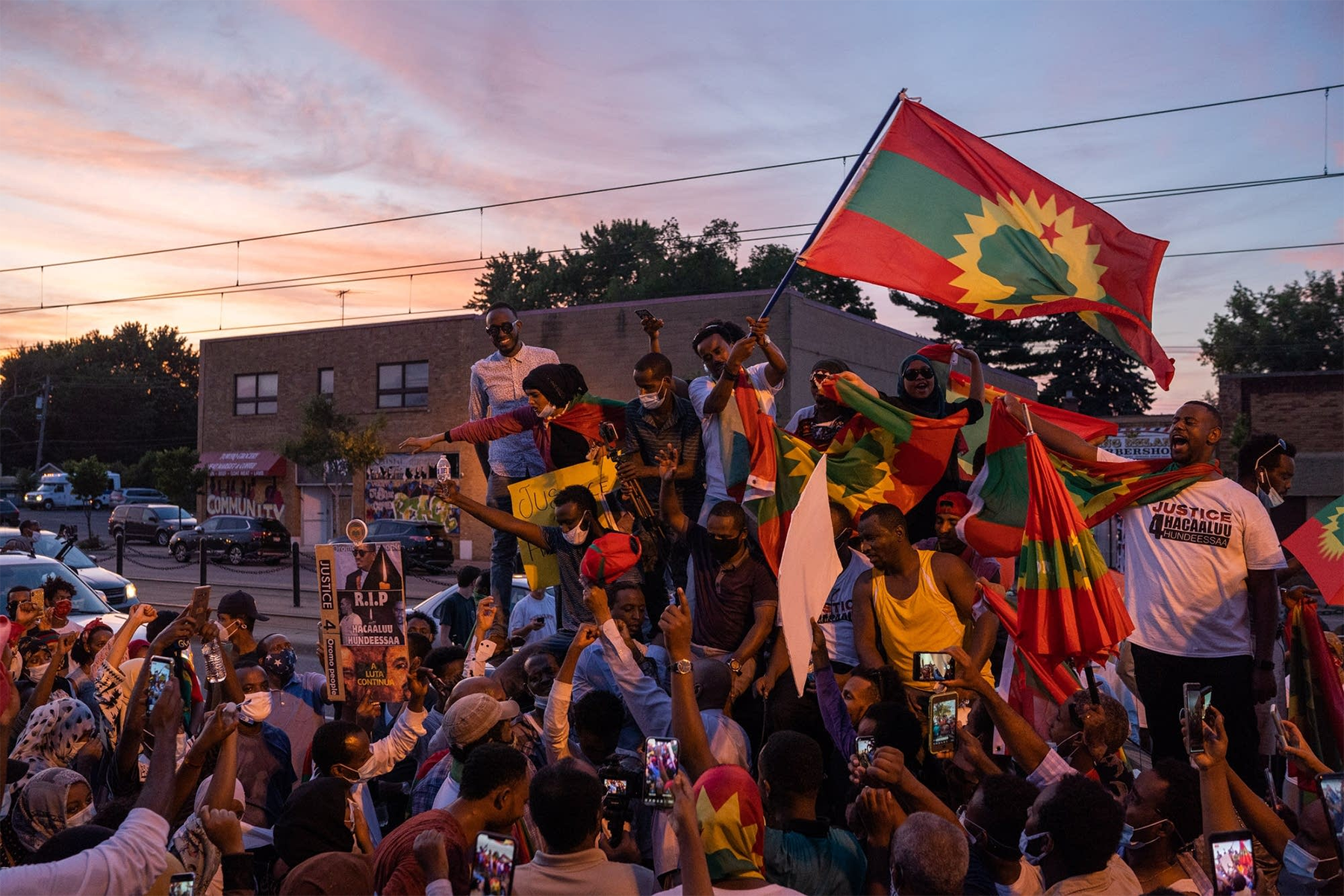 To continue reading this article and others for free, please sign up for our newsletter.

Sahan Journal publishes in-depth, reported news for and with immigrants and communities of color – the kind of stories you won’t find anywhere else.

Unlock our detailed reports by subscribing to our free newsletter.

Whoops ! An error occurred and we were unable to process your subscription. Please reload the page and try again.

Your tax-deductible support will help us continue to provide honest and thorough journalism to Minnesota’s diverse communities.

The late singer-songwriter Haacaaluu Hundeessaa walked around as if he carried the weight of the Oromo nation on his shoulders. Haacaaluu was a real performer. Even the simple act of walking was a performative exercise for him.

In 2018, after returning from exile in Ethiopia, Haacaaluu and I sat down for lunch in the capital, Addis Ababa. I asked him why he was walking around in a way that drew attention. When viewers see me, he says, they don’t just see Haacaaluu the singer; they see the Oromo nation. That is why, he said, he walked in a graceful manner that represented, honored and dignified the Oromo, Ethiopia’s largest ethnic group. Haacaaluu pranced on and off stage with this heightened sense of self-awareness.

His assassination on June 29, 2020 sparked a complex political crisis in Ethiopia.

A new documentary titled “Spear through the Heart” chronicles Haacaaluu’s life, influence and contributions to Oromo music and culture, as well as his people’s struggle for justice. The worldwide release of the film will take place at Fridley High School Auditorium, 6000 W. Moore Lake Dr NE, Fridley, Minnesota on August 28, 2022. The event takes place from 5-10 p.m. Admission is $20.

As the 48-minute film highlights, Haacaaluu embodied the best of Oromo and Oromummaa, a pan-Oromo collective identity rooted in a common heritage and vision of Oromo Gadaa deliberative democracy. A master storyteller, he expressed the desire for freedom in a way that spoke to both old and young alike. As the film poignantly reminds us, Haacaaluu honed his craft as a teenager and political prisoner in Karchale Ambo, a ramshackle prison in his indomitable hometown of Ambo.

He rose to fame during the popular #OromoProtests movement from 2014 to 2018. The non-violent revolt, sparked in 2014 in opposition to Addis Ababa’s urban master plan, coalesced around calls to end cultural marginalization , politics and economics of the Oromo. .

Haacaaluu, whose name is also spelled Hachalu Hundessa, has often insisted that he is not a politician. However, his music spoke to a generation in revolt, becoming the soundtrack to a protest movement that toppled a long-standing authoritarian regime in 2018. The Oromo protests ended in early 2018 with the rise of Abiy Ahmed as prime minister, ushering in the first peaceful transfer of power in Ethiopia’s history from one incumbent head of government to another.

In the process, Haacaaluu raised the place of Oromo music in Ethiopia. He was unwavering in his belief in and pursuit of truth and justice. He spoke the truth of his people without fear or favor, regardless of audience or platform. He knew the risks of his revolutionary music. In fact, Haacaaluu often spoke of the honor of dying or, more accurately, of martyrdom fighting against tyranny and joining the legions who died fighting for Oromo rights.

Write the Oromo resistance in history

“Spear through the Heart” dwells on the power and influence of Haacaaluu’s music, but it also showcases his unforgettable vocals and versatile range. The story is told to its music and images of the singer commanding the stage.

In the film, we learn how Haacaaluu tapped into the rich repertoire of Oromo folk songs and revolutionary culture. He repurposed folk music using modern instruments and integrated Oromo history, culture, and collective memory into his songs to articulate and amplify the grievances, experiences, and stories of his people. In this way, Haacaaluu was an ethnographer whose music organized and historicized the Oromo resistance.

Haacaaluu is best known for its Geerarsa, a genre of Oromo music performed as spoken poetry to exalt bravery, heroic deeds or as a song of praise for a dead hero. “Spear through the Heart” is a fitting praise film for the King of Geerarsa.

It’s a well-produced and well-told film that aims to honor Haacaaluu’s legacy. This is the first feature film retracing the life of the singer, his prodigious career, his generosity of spirit and the indisputable place he won in Oromo history.

The film is based on interviews with a cross section of Haacaaluu fans around the world. Most of the people interviewed in the film are young Oromo-Americans from Minnesota, encapsulating the reach, impact and inspiration of Haacaaluu’s music. The all-time great Oromo singer Ali Birra is featured prominently in the film and explains how Haacaaluu was an irreplaceable gift from God.

Haacaaluu’s murder left a gaping hole in the heart of the entire Oromo nation. The film captures palpable pain and grief in the face and words of his widow, Fantu Damisew Diro. The film’s title captures that haunting collective grief still felt two years after his shocking murder.

Haacaaluu’s killing sparked widespread protests across Oromia State. At least 289 people died and authorities arrested more than 9,000 people, including prominent Oromo opposition leaders, in the ensuing crisis. The murder remains unsolved and his family and fans continue to demand an independent investigation.

Fantu, now a single mother of three, was Haacaaluu’s girlfriend in high school. Haacaaluu idolized him. In her debut album, Haacaaluu had a tender song titled “Oolmaan kee”, or “Your Sacrifice”, dedicated to Fantu. In the song, Haacaaluu recounts how much she suffered because of him. He despairs of ever being able to thank her for the love and care she has given him. He promises to love her unconditionally until the end of time.

“Spear through the Heart” is dedicated to the daughters of Fantu and Haacaaluu. Despite the crushing loss she suffered, Fantu stood firm to honor Haacaaluu’s memory and seek justice for him. Near the end of this heartbreaking film, Fantu agonizes over never having told Haacaaluu how great he was while he was alive. She dedicates “Oolmaan kee” to him in paradise. It is excruciating to listen to her words and see her face change as she recounts the heavy loss.

If there is any solace in this tragedy, it is Fantu’s strength and courage in the face of an indescribable tragedy that should give his fans the necessary impetus to uphold Haacaaluu’s legacy and ensure that he receive justice.

Bruno Sorrentino’s film, produced by Awol Allo, is haunting and difficult to watch. It offers a comprehensive portrait of Haacaaluu as truthful as his music.

How to watch the documentary

What: The worldwide release of “Spear through the Heart” and a panel discussion on the legacy of Haacaaluu Hundeessaa. Members of the Minnesota Oromia Youth Association will also present a cultural performance at the event.