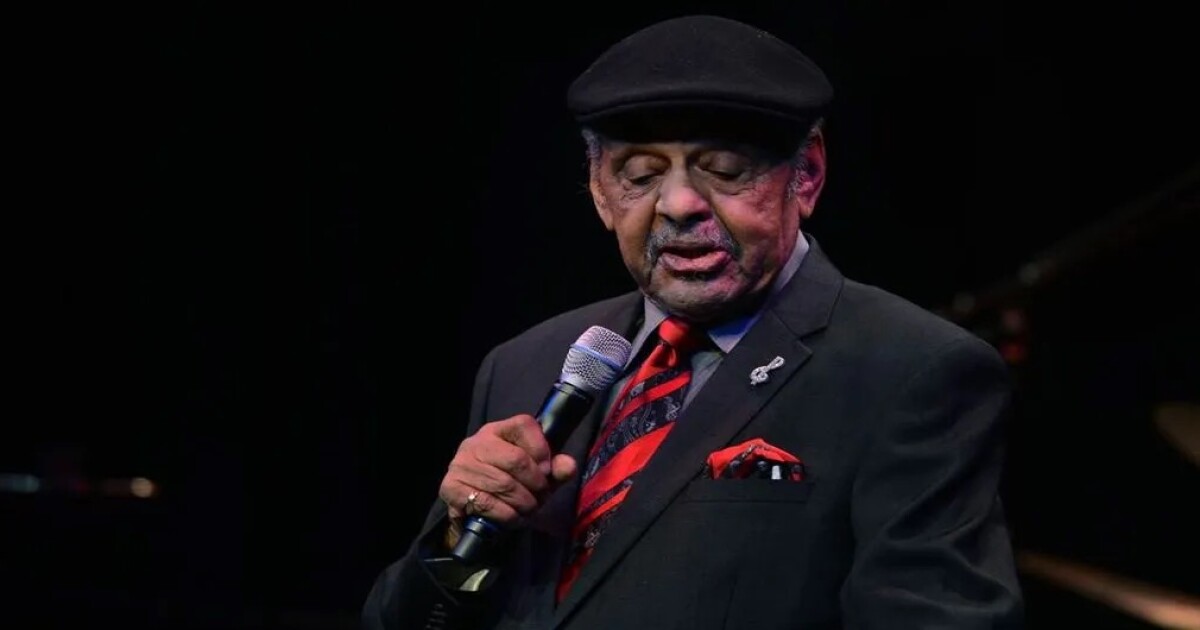 Ernie Andrews, whose suave, booming baritone was a staple of post-war jazz and rhythm and blues – and a prized feature of his adopted hometown of Los Angeles, during and long after the heyday of Central Avenue — died Monday at Conroe Regional Medical Center, outside of Houston, Texas. He was 94 years old.

His daughter, Stephanie Williams, said the cause was complications from a blood clot that formed after he broke his hip in a fall.

Throughout a career that began as a teenager – producing his first hit record, ‘Soothe Me’, in 1945 – Andrews was the epitome of unflappable poise and playful charm. His keen instinct for blues inflection makes him an ideal messenger for songs of longing and heartache, or soothing and flirtatious. It’s not for nothing that NEA guitarist and jazz master Kenny Burrell, one of his oldest and closest friends in the business, called Andrews “one of the most versatile vocalists never heard”, speaking with the Los Angeles Times.

The full extent of this flexibility and charisma is evident on Live session! – a classic album that Andrews made with Cannonball Adderley, produced by Adderley and David Axelrod for Capitol Records. With Nat Adderley on cornet, Joe Zawinul on piano, Sam Jones on bass and Louis Hayes on drums, it’s a glimpse of the Cannonball Adderley Quintet in battle trim, and Andrews almost sounds like he’s a regular member of the group. Here he convincingly sings a hymn to self-confidence.

At age 13, Andrews moved south to Jeanerette, Louisiana to live with his maternal grandmother’s family. There he fell into extraordinary luck: the music teacher at his school happened to be Bunk Johnson, a renowned trumpeter from New Orleans. Under his baton, Andrews became a drummer in the school band.

Another, more permanent move occurred in 1945, when he moved with his family to Los Angeles. He had always sung, but it was there that Andrews began to see himself as a singer – during his time at Jefferson High School, where his classmates included Dexter Gordon, Eric Dolphy, Chico Hamilton and Sonny Criss. Further encouragement came at the Lincoln Theater on Central Avenue, where he worked as an usher and often turned heads in a talent show.

During one such contest, he was approached by a songwriter named Joe Greene, who had written catchy hits like “Across the Alley from the Alamo.” Greene was responsible for Andrews’ first recording session, which had “Soothe Me” as the B-side to a new song called “Wrap It Up, Put It Away (Till Daddy Comes Home From the Army)”. After “Soothe Me” sold over 300,000 copies, Andrews found himself in high demand.

But, for some reason, not quite the level of popular success that many felt it deserved. Instead of becoming a household name, he found traction as a connoisseur’s choice, working with a brilliant array of jazz musicians. In 1958 he joined the Harry James Orchestra as singer, a position he held for over a decade. It offered high visibility and steady employment, the latter of which appealed to Andrews, especially as a family man.

Dolores Andrews predeceased him in 1997, after 52 years of marriage. Four of their five children survive him: in addition to Stephanie Williams, they are Dueal Ernie Andrews, Mark Anthony Andrews and Daryl Mitchell Andrews. (Another son, Dana Dee John, died in 2013.) Andrews is also survived by 12 grandchildren, 22 great-grandchildren, and seven great-great-grandchildren.

The Los Angeles jazz scene slowed considerably in the late 1960s and 1970s, and so did Andrews’ career. But he kept working, cultivating relationships with bands like the Frank Capp-Nat Pierce Orchestra and the Clayton-Hamilton Jazz Orchestra. In the mid-1980s, he was the subject of an hour-long documentary about Lois Shelton, Ernie Andrews: Blues for Central Avenue, which was broadcast on television and screened in some cinemas.

“Mr. Andrews, and others who were there, remember the big bands, the nightclubs, the gambling, the gin in the tub and the segregation that was part of life,” Jon observed. Pareles in his review for The New York Times. “There’s a lot of nostalgia, but there’s also the kind of gritty detail that’s omitted from too many jazz memoirs.”

As he settled into life as a jazz elder, Andrews never wavered in his enthusiasm on stage, nor lost his ability to locate the emotional center of a song. Some of his best work came in collaboration with other veterans like saxophonist Houston Person, as on the 2003 album Jump for joy; on a song like “If You Never Fall In Love with Me,” there’s a world-weariness that Andrews carries lightly, like a pitcher who’s lost a bit of speed on his fastball but none of his accuracy or sound. instinct.

“I’m not the guy I used to be anymore,” he sings in the second verse. But part of the charm of Andrews’ long career is that he never stopped being the guy he had always been.