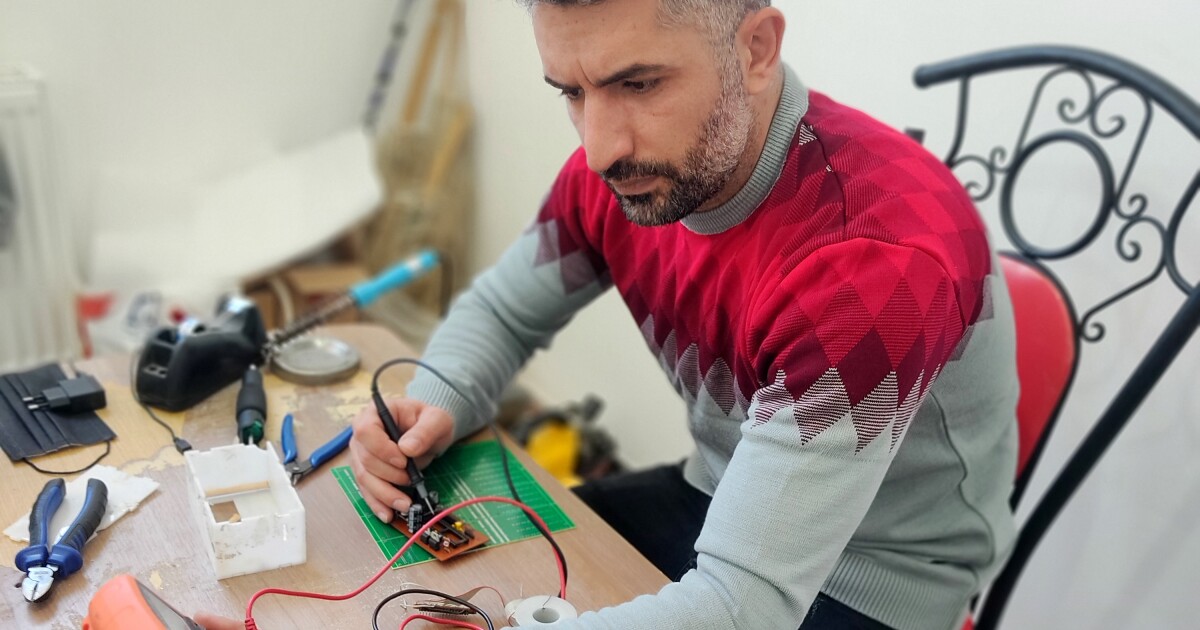 Vahid Muharrami came across plans for his own execution while working on the prison computer system.

Held in northwestern Iran, he had been asked by prison officials to help with computer work at the facility because of his technical expertise. This is how, in August 2020, he comes across the documents that give him two more days to live, at most.

“When I saw the special documents in the system, I realized that I was only 24 hours or 48 hours maximum from the gallows,” said Muharrami, 37, who was sentenced to death for his role in a 2014 brawl that killed a man. .

He had already seen 130 other convicts from his prison in the town of Ardebil being sent to their deaths over the previous six and a half years. Muharrami asked permission to call his mother to dictate his last will and will over the phone – and to prepare her to see his broken and lifeless body in the prison yard, so that she would not pass out like many other mothers of executed men. had.

But before the sentence could be carried out, Muharrami was suddenly spared from the executioner’s noose. His savior was neither a judge nor a lawyer. It was one of the biggest Iranian pop stars, Mohsen Chavoshi.

The singer-songwriter stepped in at the last minute to help lift the “blood money” that Iran’s justice system allows to be paid to the family of a homicide victim in lieu of an execution, if the family agrees to accept it. Chavoshi has made it a personal campaign to save as many death row inmates as possible through such means, with the aim of reducing the number of executions in a country that kills more people than almost any other.

Muharrami and his family had a bit more time to rack up the payment, which they eventually secured with a large contribution from Chavoshi.

“Every moment of every day I thought of my lonely mother and brother who would not survive the immense grief after my execution,” Muharrami recalled of his ordeal on death row.

Last year, Iran executed 280 people, according to a March report by the UN special rapporteur on the country. This is an increase of almost 14% from the 246 recorded by Amnesty International in 2020, which accounted for more than half of all known executions worldwide that year. (China is believed to execute thousands of people each year, but keeps this information a state secret.)

Under Tehran’s theocratic regime and its conservative interpretation of Sharia, or Islamic law, the death penalty is harshly meted out to those convicted of murder or manslaughter. But some convicts have been saved through the practice of blood money, which the families of their victims choose to receive as restitution out of compassion, poverty, pressure or other motivation.

Chavoshi, 42, managed to save more than 50 people from the gallows. His success comes from mobilizing his legions of loyal fans – he has 4.3 million followers on Instagram – who respond to his regular appeals for donations to help fellow Iranians in difficult circumstances, whether convicts to death desperate to have their sentences lifted or poor patients in need. emergency surgery.

His popularity and activism have fed each other in a country where, despite its leaders’ uncompromising rhetoric, social discontent simmers beneath the surface, including opposition to the liberal application of capital punishment.

Bahman Babazadeh, a prominent music blogger and close associate of Chavoshi, said the singer commands the respect of millions of Iranians for “tackle sensitive social phenomena that few artists or even politicians have touched. “.

Chavoshi, who declined to be interviewed, spoke out on issues such as Iran’s water crisis and human trafficking. In his song “Dubai”, he sounded the alarm about the growing number of Iranian women trafficked for prostitution to Persian Gulf countries.

“He has been recognized and trusted by Iranians as an outspoken critic of many social ills and problems that have been exacerbated during the country’s long years of isolation,” Babazadeh said.

In addition to saving prisoners from paying the ultimate price, Chavoshi managed to help reduce the sentences of 320 people convicted of lesser crimes, such as bad checks or defaulting on loans.

His musical career began in 2003, when he was 24 years old. Since then, he has become one of Iran’s best-selling artists, releasing 11 albums and over 200 songs, many of which deal with social issues rather than the usual pop themes of love. and grief and everyday life.

He began getting seriously involved in charity work in 2009, including helping rescue those on death row. Babazadeh said the singer, who grew up in the war-torn town of Khorramshahr on the Iran-Iraq border, found the experience rewarding.

“I remember when the first four or five convicts were saved from execution, Mohsen was really touched and felt so good about it,” Babazadeh said. “That special feeling has only grown stronger since then.”

Chavoshi is not the only Iranian celebrity to come to the aid of those on death row. Football star Ali Daei has also offered his support to those on death row out of his own pocket, recently saving a woman from execution in the 11th hour by constantly appealing to relatives of the businessman she has killed in a confrontation and paying them blood money.

On Persian Twitter, the hashtag #No_to_Execution tends from time to time. Two years ago, a social media campaign against the executions sparked an outpouring of support after an Iranian court upheld the death sentences of three young men who had joined anti-government protests.

Chavoshi has been pushed back by some conservatives for his efforts. Commenting on one of his calls on social media, a critic wrote: “Did Chavoshi help free 52 convicts or 52 murderers?” He has also been criticized for not asking for clemency for political dissidents who have been sentenced to death.

And abolition of the death penalty is unlikely to be imminent, despite some modest legal reforms instituted by Iran’s usually radical President Ebrahim Raisi when he was head of the judiciary. Most of the country’s political and religious leaders, as well as a significant section of society, view capital punishment as just retribution for major crimes.

The number of executions in Iran has increased over the past year, according to the Iranian human rights organization HRANA. Experts note that the country’s dire living conditions and economic freefall, accelerated by heavy US sanctions, have been accompanied by an increase in homicides – murders in fights, armed robberies and riots.

All of these crimes are punishable by death, as are rape, kidnapping and drug trafficking. The majority of death sentences in Iran are imposed on drug traffickers and smugglers.

“Security issues and drug trafficking are two major issues that make abolition of the death penalty a distant picture on the horizon,” said Fazel Hoomani, a jurist in Tehran. “Not to mention the growing insecurity and murder cases caused by the economic crisis.”

As in the United States, where impoverished defendants and people of color have been disproportionately hit with the death penalty, convicts from marginalized communities in Iran may find themselves in greater danger, especially in a justice system where the money can literally buy you your life.

After killing another teenager in a fight aged 16, Seyed Mostafa spent nine years behind bars and faced his own life cut short by hanging when Chavoshi stepped in with the funds to satisfy the victim’s family. A refugee from Afghanistan, Mostafa could not have raised the money on his own.

“He’s one in a million,” said Jalali, a chemical engineer and part-time English teacher. “I’m a big fan of his music and his personality. I would like other celebrities to follow in his footsteps as well, because our society needs this type of personality.

For Muharrami, the man who came across his own execution papers, life hasn’t been easy as an ex-con, but he knows he’s lucky to have a life.

He was bought back for 1.5 billion Iranian rials, worth about $60,000 at the time. Chavoshi covered a quarter of that amount, with the rest coming from Muharrami’s family and other donors.

Muharrami was released from prison in March last year. He’s been busy trying to get back on his feet, looking for investors in his patented weight machine and looking for ways to help his family, who spent almost every penny they had trying to save him from death. gallows.

He dreams of meeting the man who finally did just that, and knows exactly what he would say.

“Mr. Chavoshi, you didn’t just save me,” Muharrami said. “You also saved my mother and my younger brother. I will prove that I was worth it.

Actor and singer Jordan Fisher will sing the national anthem