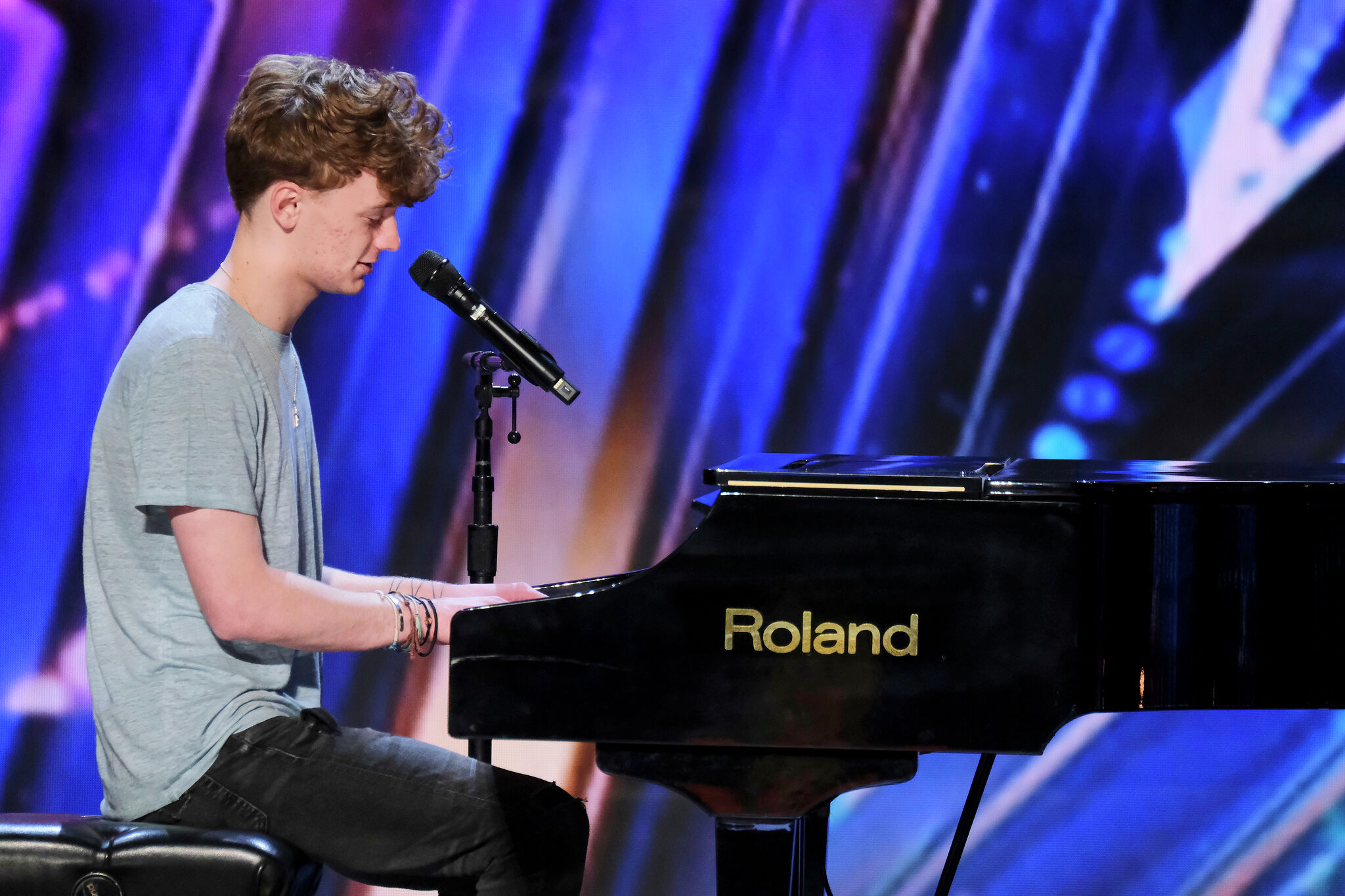 Kieran Rhodes, pianist and singer, performs on “America’s Got Talent”

Update: Kieran Rhodes performed Tuesday night and took the next step on “America’s Got Talent.”

BURNT HILLS — Singer and songwriter Kieran Rhodes has joined a long line of Capital Region performers to see if he has what it takes to win the hearts of the nation.

Rhodes, a Berklee College of Music student, will appear on NBC’s “America’s Got Talent” – singing and performing for the judges of the popular TV talent show. Airing at 8 p.m. Tuesday night, Rhodes posted his “AGT” audition on Facebook, saying he had “kept the news quiet for a few months” and was “so excited.”

He also urged his friends to watch “to see if Simon (Cowell) likes me.” Rhodes, who is 20 and a graduate of Burnt Hills-Ballston Lake Central School, performed an original song for the nationally televised audition.

Rhodes landed an audition after one of the producers saw him perform in Boston.

“Honestly, ‘America’s Got Talent’ wasn’t even a thought in my mind at all,” Rhodes told The Times Union on Monday. “She saw me play and came up to me and said, ‘I need to have you on the show.’ She introduced me to her leaders and they approved of me. And they shot me. It was crazy and I’m super, super grateful.”

He said he was nervous about the audition, not because he was performing to a crowd of 3,000 at the Civic Auditorium in Pasadena, California. He was nervous to face the judges.

“What scares you are the four famous judges who might tell you they don’t like you,” Rhodes said. “That’s the nervous factor for me.”

Her mother, Mia Scirocco, who is a professional singer, was in the audience during the audition, which she called “not your normal audition.” She said she was impressed with how her son handled the pressure.

“I was going there to give him support and help keep him calm,” Scirocco said. “I don’t even remember everything that happened. It was like an out of body experience and it was nerve wracking. He handled it with confidence and grace.”

Rhodes embarked on a musical career. But he never considered one until his freshman year in high school.

Before that, he played baseball 12 months a year, traveling the country for tournaments in the hopes that a college scout would notice him. His goal as a second baseman was a spot on a Division 1 varsity team.

Then, during his freshman year in high school, he said he “had a weird urge” to play the piano in his mother’s music room. He started watching YouTube videos of artists like Billy Joel, Elton John and James Taylor and learned how to play. When he was a junior, he accompanied the Burnt Hills-Ballston Lake High School jazz band.

“It all happened very quickly,” he said.

Still, Rhodes is a team player and stuck with his baseball friends, playing varsity ball until he graduated in 2020.

“It was interesting,” Rhodes recalled. “During this whole crossover period, I was running from baseball practice to music rehearsals. My friends were making fun of me because I was no longer a 100% athletic person. It was a complete change, but my coaches were very, very supportive of my decision to make music. I’m very grateful.

His background sets him apart from other Berklee students, many of whom trained from early childhood with their instruments to enter one of the nation’s top music schools.

Rhodes, whose family still lives in Burnt Hills, enjoyed a local following when he performed with a band on the main stage at the Albany Tulip Festival last month.

In a clip from a different performance on Facebook, Rhodes’ voice and falsetto sound like Chris Martin, the lead singer of the band Coldplay.

“America’s Got Talent,” which in the final rounds asks its TV audience to choose its million-dollar winner to headline Las Vegas, has drawn artists from the capital region in the past. . Rubik-Cube magician Steven Brundage of Saratoga Springs appeared on the show in 2016 but was voted out in the semi-finals. Schenectady dancer Ezra Masse-Mahar performed in the show the following year with the Diavolo ensemble. This group made it to the final.

Other locals who have received national recognition through televised contests include singers Sawyer Fredericks, Moriah Formica and Delaney Silvernell, all of whom appeared on “The Voice.” Colonie singer Madison VanDenburg also won acclaim for her 2019 appearance on “American Idol.”

Rhodes and Scirocco are to keep the famed judge’s reaction to his audition a secret until the show airs on Tuesday. But Scirocco, who is an adjunct professor of vocal music and rock music history at SUNY Schenectady, said she was proud.

“He’s a hard worker. I really have no words,” she said. “It’s just exciting.”