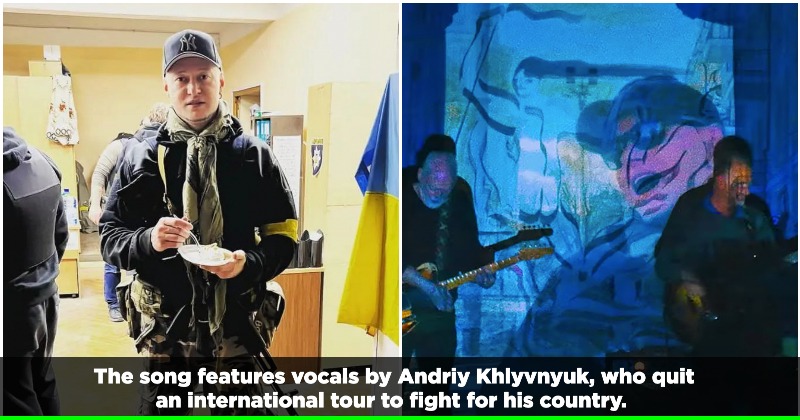 After more than two decades, British rock band Pink Floyd have reunited to release a new song on Friday in support of Ukraine. Their latest product “Hey Hey Rise Up” released will go to humanitarian aid.

Pink Floyd collaborated with Ukrainian singer Andriy Khlyvniuk of the band Boombox to release a song in favor of Ukraine.

The Ukrainian singer who left an international tour to fight for his country and was injured lent his voice.

According to reports, Khlyvnyuk left Boombox’s US tour and returned to Ukraine, and joined the Territorial Defense Forces. He is currently recovering from a shrapnel wound.

The newly released song features vocals from Andriy Khlyvniuk from his video singing a folk song in the capital city of kyiv, which became the unofficial anthem amid the Ukraine-Russia war.

Khlyvniuk’s Cappella voice was taken from an Instagram video shot in kyiv’s Sofiyskaya Square that he posted five weeks ago.

In the video that has gone viral, he is seen singing a song from the First World War. The Ukrainian protest song, “The Red Viburnum In The Meadow”, saw its revival as a cry against Russia’s war on Ukraine.

The last line of the song translates to “Hey hey, get up and rejoice.”

Music for the new song was recorded on March 30 by longtime members Gilmour and Nick Mason, along with longtime bassist Guy Pratt and keyboardist Nitin Sawhney, Variety reported.

“We, like so many others, have felt the fury and frustration of this despicable act of an independent and peaceful democratic country being invaded and seeing its people murdered by one of the world’s major powers,” Pink Floyd’s David Gilmour tweeted.

(For the latest updates from Bollywood and Hollywood, keep reading Indiatimes Entertainment.)