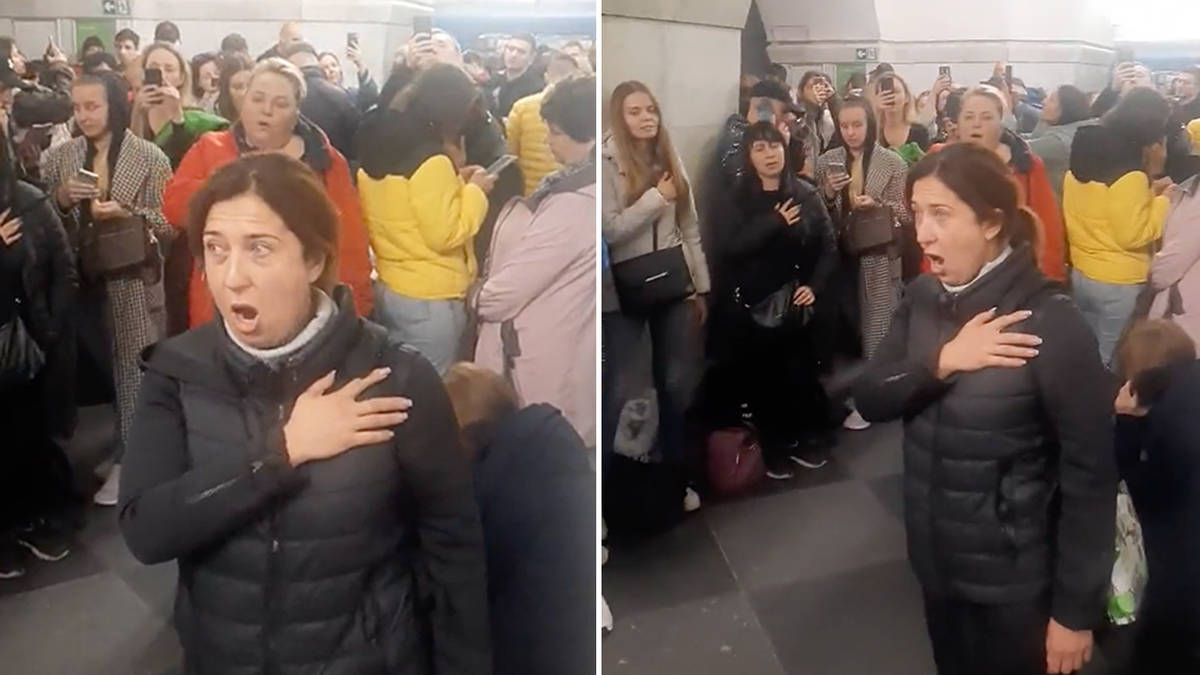 An opera singer boosted morale as Russian airstrikes hit the center of the Ukrainian capital in one of the biggest attacks since the invasion began.

Sheltered in a subway beneath Kyiv’s main train station, a Ukrainian opera singer lent her voice to a gathered crowd as she led them through a powerfully moving rendition of her country’s national anthem (video below) .

The video was filmed by Oleh Maksymiak, assistant to Ukrainian MP Inna Sovsun who posted the video on Twitter with the caption: “In this station people sing the national anthem of Ukraine with an opera singer” .

The unnamed opera singer’s voice echoes above the crowd, as they raise their own voices with hands on heart to join her in song.

Read more: What are the words of the Ukrainian national anthem and how does it translate into English?

Civilians were herded underground when Russian missiles hit downtown Kyiv – the first time the strikes have hit the center of the capital during Russia’s current invasion.

The recent series of missile strikes, which targeted civilian areas and key centers of national infrastructure, were condemned by various world leaders, including Pope Francis who called the attacks “a hurricane of violence”, and French President Emmanuel Macron.

Ukrainian President Volodymyr Zelensky met with G7 leaders on Tuesday, October 11, where a spokesman for the office of the UN High Commissioner for Human Rights called Russia’s recent actions a “war crime”. .

Addressing the assembled world leaders, Ravina Shamdasani said: “The damage to major power stations and power lines before next winter raises new concerns for the protection of civilians and in particular the impact on vulnerable populations.

“Attacks targeting civilians and objects indispensable to the survival of civilians are prohibited by international humanitarian law. We must emphasize that intentionally directing attacks against civilians and civilian objects – that is, objects that are not military objectives – amounts to a war crime.

Russia’s current spate of attacks has hit towns beyond Kyiv. Just over 500 kilometers away, in Sloviansk, in the Donetsk region of eastern Ukraine, missile strikes killed innocent civilians, including Kateryna, a violinist.

Kateryna, 25, had fled her frontline home with her 12-year-old brother Ruslan to stay with a foster family, Elena and Oleksei Sudova. When a missile hit the Sudovas’ house in the early hours of October 10, Kateryna was killed along with the Sudovas.

Ruslan survived and was taken to hospital with injuries from the blast, which also killed a 45-year-old teacher who lived across the street.

Read more: The mighty Ukrainian anthem fills the Odessa Opera House, as it reopens for the first time since the Russian invasion

Kateryna, 25, is said to have been a talented musician, who enjoyed playing the violin for the local community as shops and businesses reopened, and people started spending time outdoors again.

One of their neighbors in Sloviansk, Natalya, said: “The boy and the girl [Ruslan and Kateryna] had a really terrible experience in Debaltseve, all those fights they had seen.

“Kateryna was adorable, she played the violin and now she’s gone and Elena and Oleksei are also dead, may God rest their souls.”