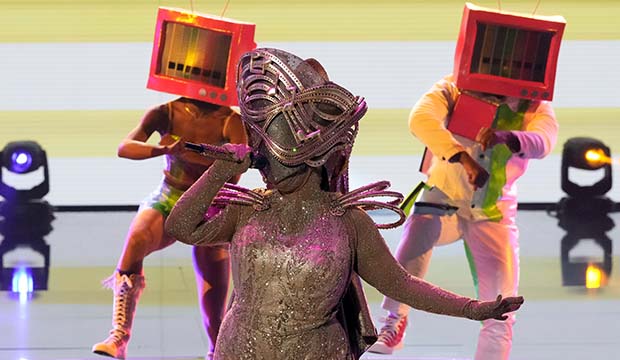 Recap of episode 3 of season 8 of “The Masked Singer”: who was unmasked?

By Samuel K. Myers Last updated Oct 6, 2022
Share
FacebookTwitterLinkedinMix
Light, camera, action! This week’s episode is full of nostalgia as two famous new singers enter the competition and perform iconic theme songs from TV shows throughout history. The stakes are higher than ever as the king or queen of the episode will head straight to the semi-finals. The season 8 contestants have a total of 32 Grammy nominations, 16 Emmy Wins, 8 gold albums, 4 Golden Globe nominations, 42 books, 10 Teen Choice Awards and 5 stars on the Hollywood Walk of Fame. Play with the host Nick Cannon and famous panelists Ken Jeong, Jenny McCarthy Wahlberg, Nicole Scherzinger and Robin Thicke.

Each episode features several jaw-dropping performances by intricately dressed celebrities, but for the first time ever, only one contestant will pass from each episode. The studio audience will vote for their favorite, and the singer with the fewest votes will unmask in full show! This celebrity will get a front row seat in the “Masked Singer” VIP section to watch the rest of the competition and the second unmasking.

Then, the top two singers face off in a Battle Royale performance of the same song. The winner will be crowned king or queen of “The Masked Singer” and advance to next week’s episode against a new competition, and the other will unmask! The three finalists remaining standing after each heat will advance to the semi-finals.

Below, read our minute-by-minute recap of “The Masked Singer” from Season 8, Episode 3, titled “TV Theme Night,” to find out what happened on Wednesday, October 5 at 8:00 PM ET/PT. Then be sure to talk in the comments section about your favorite costumed characters from the Fox reality show and who you think has what it takes to win the whole contest.

Keep refreshing/reloading this “The Masked Singer” live blog for the most recent updates.

20:00 — “Previously on ‘The Masked Singer’!” In episode 2, Harp was crowned queen for the second week in a row after a powerful rendition of “I Have Nothing” by whitney houston. That meant three more singers were sent packing, starting with the NSYNC star Chris Kirkpatrick like Hummingbird. Next to go were Jeff Dunham as a pirate and Montell Jordan like Panther. Can Harp keep her crown for a third week? Or will a fierce new competitor pinch its strings?

8:05 p.m. – Celebrating “TV Theme Night”, Robin kicks off the show by singing his father’s theme song to “Growing Pains”. They also copied the intro from the sit-com showing childhood photos of the panelists. I think they should just keep this intro to the show forever. It was a nice tribute to Alan Thicke and Robin’s mother is in the audience. We learn some trivial facts, like Nick’s favorite TV show is “All My Children”.

8:06 p.m. — The first challenger tonight is The Mummies. There are three of these creepy walking creatures with a “Three’s Company” theme. How about some clues? They come to us live “in living color” as they tell us to sit down right away telling us how they turned out. We’ve watched them grow, and they can even feel like family. They say the bonds between siblings are the strongest, right? They learned a lot from each other. Although they’ve been off the grid for a while, that’s what they’re most famous for. During this package, we hear someone say “Woah!” As Joey Lawrence Blooming.” Could it be the Lawrence brothers, Joey, Matthew and Andrew? Visual clues include blueprints of a house that say “Iconic”, “The Masked Singer” Fox (who was wayne brady) and the magazine “Tiger Pop”.

8:12 p.m. — Tonight, the mummies are singing “The Monkees” and they have beautiful voices, but they are by no means singing superstars. I guess they are TV or movie stars who grew up in the spotlight. Anyway, it’s fun to see a trio on stage and they have a great energy. Jenny says their harmony was beautiful and she enjoyed the choreography. Tonight’s first clue is TV icon and unicorn “Masked Singer”, Tori Spelling (“Beverly Hills 90210”)! She holds up a clue that says, “Blended Berry Bros Smoothie Packets.” A mummy says, “It’s good for the soul. Another said: “Refreshing, classic.” And the third says, “And the smoothies are pretty good too.” Hmm. Nicole guesses Brian Austin Green, Jason Priestley and Ian Ziering. She also names Barry Williams, Christopher Knight and mike lookinland from “The Brady Bunch”. Ken thinks he knows EXACTLY who these three are – the Lawrence brothers. He also thinks it could be the Hemsworth brothers as the audience starts shouting “Boo!”

8:16 p.m. — The second challenger tonight is the Fortune Teller. We cannot see the body of this mysterious creature, so it is difficult to assess its size. Let’s get some clues! Growing up and watching TV in Queens, he had a vision to be a great king of music. He wasn’t the best singer so he tried to make it as a dancer. He got beaten up by Jermaine Dupri. With the help of his mother, he found a unique way to succeed in the industry. Soon everyone wanted a bit of him in their music videos. Then an unusual offer came while he was “Keeping Up With the Kardashians.” If it wasn’t for them, he might have missed something. This kid from Queens has kicked things into high gear. Visual clues to her package include the “Jackpot” on a spinning wheel, brownstone apartments, a business card, a line of clothes, and an angel in a briefcase.

8:22 p.m. – The Fortune Teller sings “Movin’ On Up” from “The Jeffersons”. He wasn’t wrong to say he wasn’t the best singer, but when he comes out of his dressing room, he enjoys dancing around the stage. Jodie Sweetin (“Full House”) highlights his clue, which reads, “New York Fresh Pizza Dough,” to which he adds, “With a bit of time, you too can turn the dough into your own piece of pie. ” jenny guess P.Diddy Where The god of food. Ken thinks it’s John Daymond and Nicole says Ryan Seacrest.

8:33 p.m. “Harp is now ready to defend her crown, and judging from what we just heard, it shouldn’t be that difficult. No offense, the performances were fun, but Harp is a vocal beast. This week, she tells herself to have fun and live in the moment. She gives us another clue: a Christmas cupcake. The harp sings “Thank You. You For Being a Friend” from “The Golden Girls” which is a brilliant song choice. It’s not my favorite performance from her, but she should definitely be the one to progress in this competition. I’m still sure it’s Amber Riley. Tori returns to deliver another clue, this time it says “purple mashed potatoes”. Harp adds, “They’re almost too good to mash, but… who doesn’t love a good mashed potato? The panelists guess Jill Scott, Fancy or Amber Riley (Nicole) and Ariana DeBose (Jenny).

8:45 p.m. — The character with the least votes and unmasked first tonight is the Mummies. Before unmasking, the panelists give their final guesses: Joey, Matthew and Andrew Lawrence (Ken said Martin instead of Andrew as a joke), the ‘Home Improvement’ brothers (Jenny) and ‘The Brady Bunch’ (Nicole and Robin ). Finally, the mummies unbox to reveal that they are indeed Barry Williams, Christopher Knight and Mike Lookinland from “The Brady Bunch”! Nicole was right!

8:50 p.m. – Fortune Teller and Harp will now face each other in the Battle Royale. Let the battle begin! They sing “Everywhere You Look” from “Full House”, which makes Jodie smile in the audience. Fortune proves that he still cannot sing, but he gives everything. Then, Harp puts his own spin on it, bringing the audience members and Ken to tears. Wow!

9:00 p.m. – Fortune Teller loses this Battle Royale, which means Harp will keep his crown and live to sing another day. Before the Fortune Teller is unmasked, the panelists reveal their final guesses: Damon Dash (Jenny), Ryan Seacrest (Nicole), Ray J (Robin) and Daymond John (Ken). The fortune teller takes off his mask to reveal that it is indeed FUBU founder and “Shark Tank” star Daymond John! Ken was right all along!