Garrett T. Capps is performing at Paper Tiger in 2021.

At this point in his budding career, it might be easy for alt-country artist Garrett T. Capps to become the “I Love San Antone” guy.

After all, many people’s introduction to the Alamo City-based singer-songwriter has come through tunes that extol the virtues of his hometown while channeling the infectious sounds of some of his best musical exports. , including the late Doug Sahm.

Fortunately, the new album people are beautiful (Spaceflight Records) of Capps and his cosmic group NASA Country is further proof that he is not so easy to categorize.

The eight-song release is the latest episode of Capps shadow trilogyin which he literally takes on the cosmic Texas cowboy mantle by layering elements of space rock and ambient music under the twang.

Written during the early days of the pandemic and recorded a few months after, there is a lot of soul-searching in the lyrics, which the kaleidoscopic musical approach helps to amplify. Even on the most direct tracks, the rippling steel guitar and electronic treatments lend a shimmering vibe, as if Brian Eno has decided to move to Nashville instead of composing music for airports. 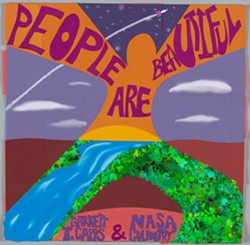 It’s easy to see how much of the uncertainty of early 2020 wore on Capps as he wrote people are beautiful.

Credit Justin Boyd on modular synthesizer, Torin Metz on lap steel guitar and vocals, Odie on bass and vocals, and Kory Cook on percussion for being able to add an experimental bent to the proceedings without losing sight of the songs’ honkytonk heart. .

It’s not until the mid-album track “Time Will Tell” that the music turns completely away from its classic country roots and towards Krautrock – think Neu! — as the extended outro of “Time Will Tell” weaves its way into Hawkwind territory.

Aside from some awkward moonspoon rhyme schemes early in the album, Capps proves himself to be an adept lyricist, opening up about his own failures, fears and insecurities while looking for hope around the corner. from the street. “Keep cool, it’s getting better / It just gotta hold together,” he urges the listener on “Gettin’ Better,” the album’s two-step opener.

In the title track, Capps’ fast-paced vocals tick off a list of things that make people mad before returning to the chorus in an apparent reminder that our incongruities are what make us human. “Our love is irrefutable / Cosmically inscrutable / Some facts are immutable / But people are beautiful.”

It’s easy to see how much of the uncertainty of early 2020 wore on Capps as he wrote people are beautiful. Although largely upbeat, the album doesn’t shy away from observing the darkness all around. Capps’ genuine and consistently easy delivery also steers it away from self-help book territory.

The world can be an ugly place, and sometimes we need a cosmic messenger to remind us not to let ourselves down.

people are beautiful is now available on CD and vinyl or via digital download.

Stay on top of San Antonio news and views. Subscribe to our weekly newsletter.